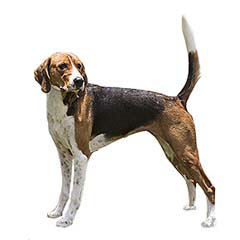 A truly native dog, the American Foxhound was a favorite of George Washington, who maintained a pack and a breeding program. Washington received some French hounds as a gift from his friend, the Marquis de Lafayette, and these were used along with others to develop the American breed. Foxhounds give voice when on the hunt, a sound called beautiful by admirers – but possibly called annoying by close neighbors.

Accepting of everyone, including other dogs, these pack-oriented dogs say, "the more, the merrier!" At least one other dog helps keep the American Foxhound more content. Studs can be grumbly with each other. Loving and affectionate to family members, they also waggily greet visitors.

The American Foxhound can be any color, but is often tri-colored. Tail is curved upwards when happy or when working (which really makes this breed look happy). Ears are long and hanging. The expression is soft and gentle. The American Foxhound is sturdy and hardy, but is taller and lighter on bone than its cousin, the English Foxhound, a breed used in its makeup.

Using his nose to track or hunt is the breed's forte. Employ the breed's superb scenting ability to play search games: find the hidden treat, find one of the kids hidden in a tree house, find the pizza crust under a basket. They also do well in field trials. Forget obedience (aside from house manners) – way too borrrrrrrrring! Blood-pumping exercise is a must for the American Foxhound. If you don't provide it, she's liable to provide her own, and it might not be in a way that wins your approval. Following a scent can lead her to skunks, porcupines, or into highway traffic.

A whistle and a promise - basics, that's it! Use a hound's glove or soft brush to remove dead hair.

Hip dysplasia and spinal degeneration can occur. Some deafness and blood disorders occasionally appear. Check whether parents are OFA certified.

Virginia claims the American Foxhound as its official state animal.

© Copyright 2014 LifeLearn Inc. Used and/or modified with permission under license.